Already a trailer at E3 for Wolfenstein II – The New Colossus!

It was in 2014 that the Swedish Machine Games resurrected, with great success, the Wolfenstein license with a great episode, unfortunately only single player. This title was enjoyable and enjoyed an incredible quality of writing. Three years later, the same team concocts The New Colossus, which takes place only a few minutes after the end of the previous episode!

It is via a trailer presented at E3 that Bethesda Softworks revealed the main lines of its game Wolfenstein II – The New Colossus. By the way, the game is expected to be released on October 27th.

The first images of this Wolfenstein II – The New Colossus during E3 lasted a good eight minutes. Now, its publisher Bethesda has also provided a slightly shortened version of these images, with a punchy and qualitative result!

In Wolfenstein II – The New Colossus, gamers will play as B.J Blazkowicz, as in previous titles. He is simply the last person who can free the Americans from the Nazi regime in the game’s storyline. Gamers will be plunged into a Nazi-controlled world in the middle of America, with the sole purpose of gathering the greatest resistance heroes still alive. During the game, you will be able to travel through real cult locations such as the town of Roswell in New Mexico or Manhattan, which was ravaged by a nuclear bombing.

It is also extremely interesting to note that in just a few minutes, this sequel takes up all the strong points of the success of the first title: second degree, simplicity and efficiency of the gameplay or the mix of infiltration and unbridled action. Moreover, the mechanics are identical (for example, the healing items and armours to collect, right down to the straight line progression). A small downside we noticed: the AI has not evolved that much. Thus, one could certainly find the title a bit outdated. But then again, why change a formula that worked perfectly three years ago?

By the way, for the many people who are wondering: Will we have to play multiplayer with this FPS? Unfortunately not! Indeed, Wolfenstein II: The New Colossus will not have any multiplayer either. This is a rather daring choice these days, but it gives the development team the opportunity to focus entirely on the single player. Besides, this stance had really helped The New Order which had a background, dialogues, characters as well as a scenario really well worked for a FPS! 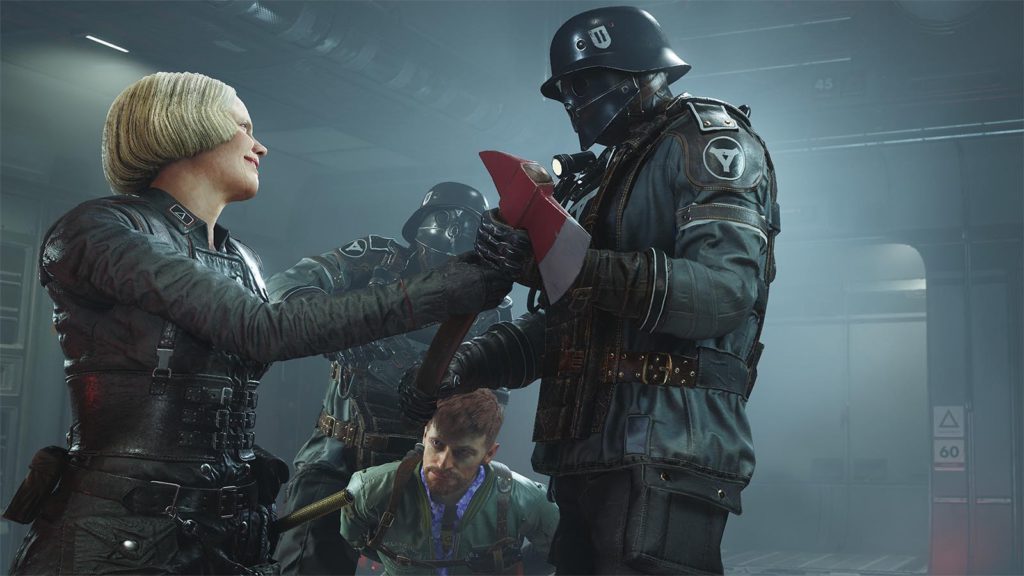 In the end, what will Wolfenstein II – The New Colossus have in store for us?

With the E3 preview, we can say that this FPS will normally keep all its promises. Those who have already played the game confirm this, as it’s nice to see the various characters left behind at the end of The New Order.

Just the idea of diving back into this universe ruled by Nazis for whom bio-mechanics are a speciality is quite appealing. Moreover, the Swedes from Machine Games have already shown that they master this universe perfectly. In short, I can’t wait for the game to be released in October! In the meantime, don’t hesitate to check out our review of Wolfenstein – The Old Blood!