Our opinion on MyNinja and its gameplay

All players attracted by the world of Naruto should take a look at MyNinja, a free-to-play MMORPG that is largely inspired by the famous manga. Entirely translated into French, GGCORP’s browser-based software promises many hours of play through its highly addictive gameplay.

The first steps on MyNinja go through the now well-known process of selecting an avatar. It is possible to choose between a male or female character, although this will have no influence on the game itself. You will then have to choose a faction for your character between Ninjutsu (master of the elements), Taijutsu (master of body techniques) and Genjutsu (master of illusion), which will determine his offensive and defensive possibilities.

The player will spend a lot of time at the Academy. This is where he will have most of his interactions with the NPCs. During the adventure, the main character moves on a horizontal plane with rather nice and detailed scenery. Most of the quests consist of fighting opponents with a defined power. Most of the time, you have to clear a dungeon, which can get boring in the long run. The goal is to increase the stats of your hero and the other characters that will make up your team. These characters all come from the extended Naruto universe, the assumed basis of MyNinja. Moreover, it must be admitted that the universe is very faithful to the manga, and takes up many of the key elements that forged the success of the little blond ninja. 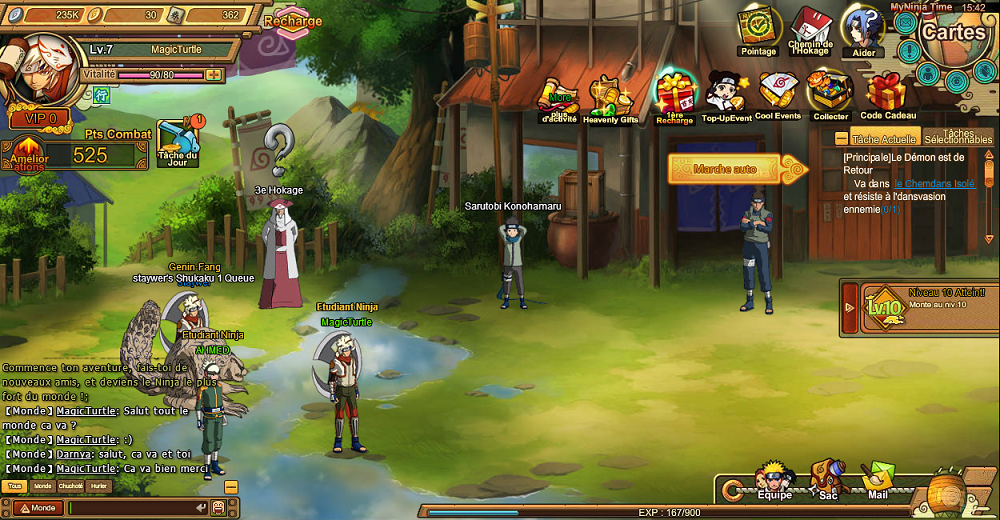 MyNinja, or simplicity in the service of richness

The game has everything that makes MMORPGs great: an equipment system, turn-based battles and abilities that evolve with the quests. MyNinja is therefore rich enough to spend time on it, and that’s the goal of a free-to-play game. One hitch, however: all these facets of the game remain very basic. But where one might have cried laziness, it turns out that the formula works quite well. In fact, in a game where you may only spend an hour a day or less (note that the number of uses per day is limited), it’s all about getting to the point. The simple (not simplistic) mechanics of MyNinja are completely in line with this.

Let’s go back to the business model. Many games offer a free experience, but this quickly shows its limits in many cases. MyNinja does this quite well. Indeed, if players can give in to the easy way of increasing their “rank” by paying with real money, there are a multitude of ways to get rewards and experience quickly for your characters. Mini-games, achievements or simply logging in to the game give you various bonuses.

Finally, you should know that the community is very active. This is a good thing, considering that some missions are only accessible from a certain level, and only if you belong to a guild.

MyNinja has a universe that is very faithful to the Manga it is based on. Its simple but addictive gameplay quickly proves itself thanks to its well-oiled mechanics. We may regret a flagrant lack of originality, and quests that are too redundant. But considering the economic model chosen, it remains a great experience.